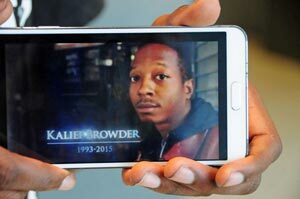 Kamal Browder holding his phone with an image of his late brother, Kalief Browder.

“Civil Rights” refers to the rights you have as a citizen, under the United States Constitution, or the New York State Constitution, to be free from unwarranted governmental intrusion. In most cases, civil rights violations involve police actions and include the following:

Mr. Prestia is regarded as a pioneer in this area when he exposed the failings of the City of New York and the New York City Department of Corrections in his multi-million dollar lawsuit brought on behalf of Kalief Browder. Kalief was held in solitary confinement as a teenager for over two years and was tortured by corrections officers prior to his case being dismissed by the Bronx County District Attorney’s Office. 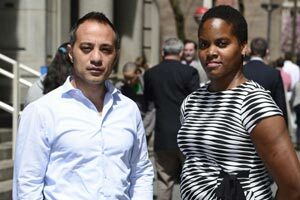 Paul Prestia with Candie Hailey, who spent 2 years in solitary while awaiting trial

If you were detained at Rikers Island awaiting trial and were subject to physical or sexual abuse at the hands of corrections officers or if you were the victim of inmate on inmate violence- you may have a claim to pursue.

You cannot be arrested unless there is a warrant for you arrest or there is probable cause to believe that you committed a crime.  If you have been arrested without a warrant and without probable cause, and your case was subsequently dismissed, your civil rights may have been violated.  You may have a cause of action against the city of NY and NYPD.

You may also have a claim if you are arrested and released prior to seeing a judge without charges being filed against you, or if you were granted an ACD by the court.

If you believe you have been falsely arrested or prosecuted, or if you were physically assaulted by the police, contact our firm for a free initial consultation. We will vigorously pursue your rights in state or federal court.

I crossed paths with Mr. Paul Prestia in the court room after watching his representation of a client he had and approached him with my case. He was polite enough to stop what he was doing and attend to my questions and even pull my file and before long entertained being my legal counsel. After…

Not only is Mr. Paul a well qualified and competent attorney, he is also a great person. He represented me during a very difficult time in my life, and always made time for my phone calls. I was treated kindly and with respect both personally and professionally. Highly recommended!

He got our back

Mr. Prestia is representing me and my fiance in a case where we were both wrongfully arrested and assaulted by the police in Brooklyn. He got the criminal case dismissed and now we are suing in federal court. He’s been by our side and has been in contact the entire way.

Mr. Paul does it all

I was arrested in october 2011.I was in a car with other people and the cops found a gun. Mr. P got the case dismissed in supreme court and then sued the city for falsely arresting me.