Our Firm will represent you with regard to all aspects of the criminal process- from arraignment to plea negotiation to trial, if necessary.  We will aggressively defend your rights in order to get you the most favorable deal possible or to get your case dismissed. Regardless, we provide the personal service you will need when facing a criminal prosecution. We practice in both State Court (all five boroughs) and Federal Court (Southern and Eastern District of New York).

If you have been arrested and charged for any of the following, please contact our firm for a free initial consultation.

In addition,  if you are the subject of a criminal investigation or have an outstanding  bench warrant, contact our firm so that we can defend you accordingly.

New York further classifies felonies as “violent” or “non-violent.” The Penal Law contains classifications for all felonies and is too voluminous to reproduce here, but some of the most common are as follows, all of which are classified as violent felony offenses and therefore subject to enhanced sentencing.

As a former prosecutor Mr. Prestia has an intimate knowledge of the inner workings of the criminal justice system. Mr. Prestia uses this experience to procure dismissals, favorable plea bargains or the best possible trial defense for his clients. 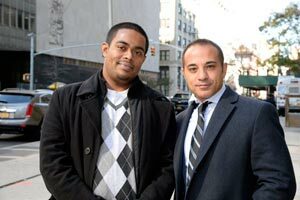 Attorney Paul Prestia with Subrotha Sarkar. The man who’s charges were dropped for allegedly being found with a pound of marijuana.

Remember, finally, that how much of your sentence you actually serve can vary, depending on such factors as good behavior.

Note that the charts above do not apply to drug and narcotics offenses, which are subject to revision following the 2009 reform of the so-called “Rockefeller era” drug laws. These reforms give greater discretion to the sentencing judge in narcotics cases.

We are also available to represent you at arraignment in any of the five boroughs.

Paul tells it like it is. Hes real you know. He breaks your case down and takes care of buisnus in court. Got my case dismissed in s minute. Hes a real cool dude

Got a pleabargain and a fine instead of jail time

Paul does a very good job working with the client on the case at hand. I am in a rare situation and am happy and confident Paul is representing me.

Paul was very good he keeps you informed and knows what he is talking about. He makes sure that everything is taken care of in a timely manner